Here are stories from some of our Bummit participants!

“I’ve never been to Austria before and it is notoriously difficult to hitchhike in. It was easter weekend and so there wasn’t a lack of people on the road, but cars were full and people were in a rush. There were three groups at this service station who we had been bumping in to all the way from Berlin and so we settled down for a chat before trying our luck. We were picked up by a woman who spoke little English, but she offered for us to stay with her and her family in the most beautiful house up in the mountains. This is a view from the balcony of the room we stayed in in her house. Probably the best last night of Bummit we could have imagined!” 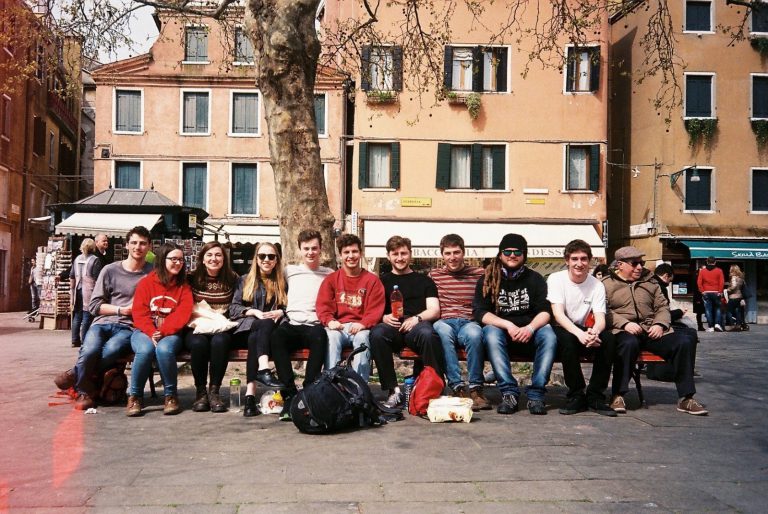 “We were on the ferry from Dover to Calais after we slept in Dover docks and a truck driver called Mike told us he would take us in to Germany. He ended up driving us for 8 hours to a petrol station outside Rheine. It was half 10 and the petrol station was about to close so we asked around but nobody would help us get to the centre of Rheine so we had to get a taxi to the train station. We ended up getting on the last train leaving the station that night to go towards Munster cause it was a bigger station. On the train we met some drunk guys who were interested in what we were doing and they were going on a night out and asked if we wanted to go out with them. We ended up going for a drink with them in Munster and one of their girlfriends offered to let us stay at their house so we did!It also turned out that they were driving the 6 hours to Berlin the next day. They made us breakfast and then drove us right to the door of our hostel in Berlin!” 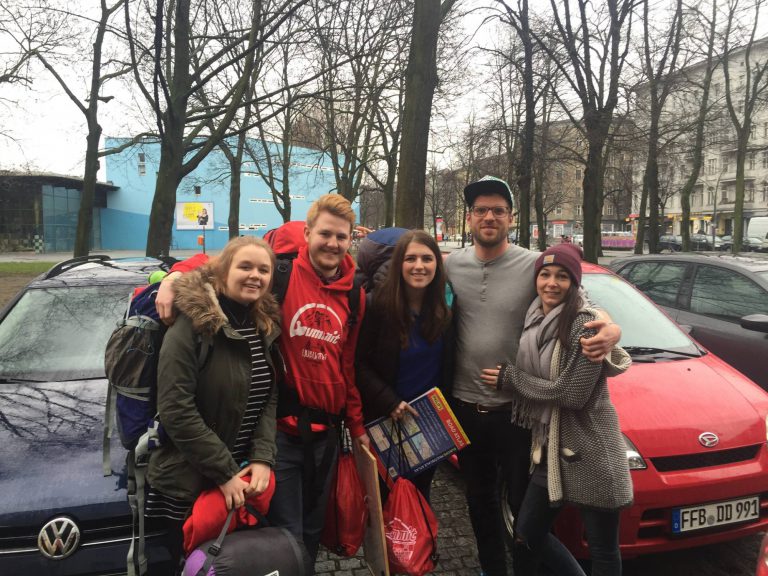 “On my first Bummit experience to Brighton my team were lucky enough to get the coolest hitch ever: in the back of a fire engine! We ended up hitching trains most of the way (dodging the conductor), and when we got into central London (which is near impossible to get out of by car) we decided to catch trains the rest of the way but needed to get from Euston to Victoria. We walked past the fire station at Euston and randomly talked to the firemen, who then proceeded to offer us a lift! No sirens allowed, but definitely the coolest hitch ever. They even gave us a tour past Buckingham Palace etc. You really do never know what you’re gonna get!” – Amy, Baby Bummit to Brighton 2012 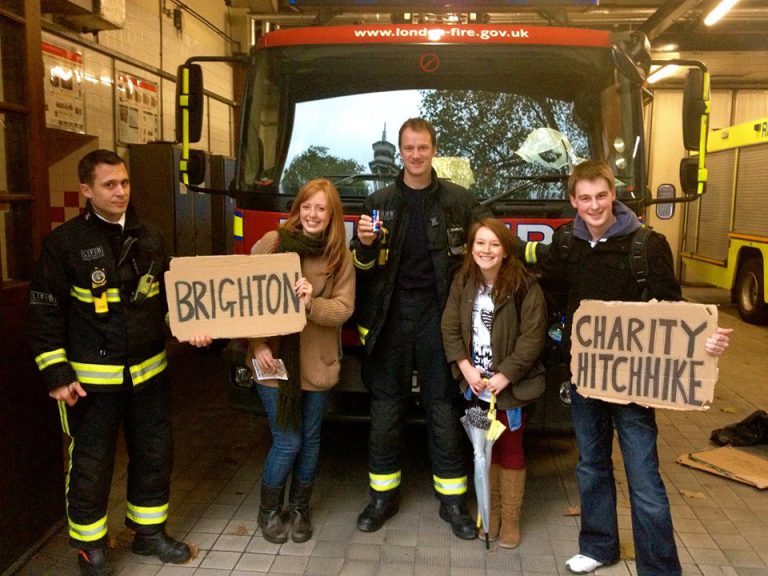 “Jess and I were strolling down the road one breezy baby Bummit morning. I had a spring in my step: it was my Birthday and soon we would be hitchhiking! Now, to say I had become passionate for hitchhiking would be an understatement. But what happened next epitomises why it’s so brilliant. With a bit of cheek and a ‘don’t ask, you don’t get’ policy you can get a lift with the most unlikely people. A police car pulled up beside us and at first we thought we going to get advised against hitchin’. We knew we weren’t doing anything illegal. It turns out they weren’t so sure and asked us if it was allowed! These guys reminded me of the police officers from Superbad, they were hilarious. At one point the sirens were on and we were going through the traffic lights! We didn’t go a long way but it started us off on one of the best days of hitchhiking I’ve ever had.” – Adam, Baby Bummit to Edinburgh 2013 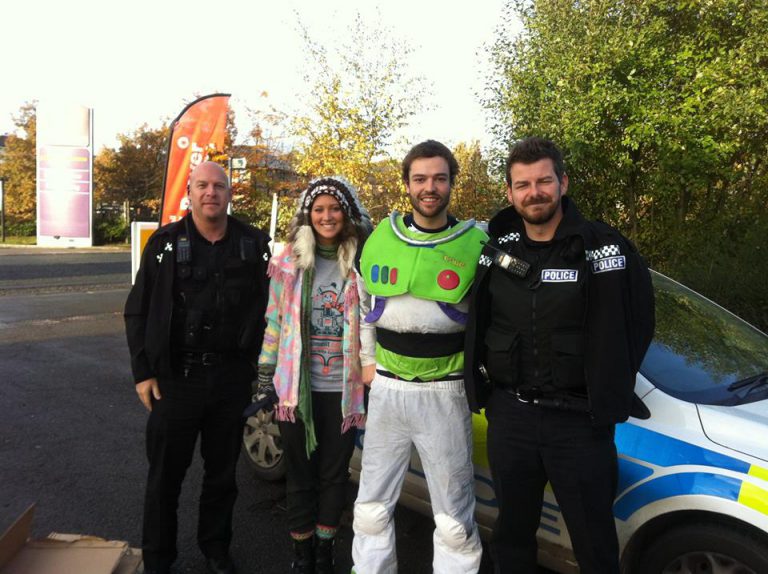 “If you’ve never heard of Morgan Heritage Google them! Day one of hitch hiking and we had managed to get a lift with this Jamaican reggae band on their tour bus, cruising from Calais to Austria in style! I think we were just in the right place at the right time and managed to get a 1000km hitch overnight into the Austrian Alps. With 16 beds on the tour bus we were spoilt for choice for a place to sleep and offered endless coconut milk! We even managed to go back stage at their gig in Prague and got a shout out too! It was literally the best hitch ever – hopefully they’ll be touring around Europe the same time in Bummit 2015 and we’ll manage to grab another hitch!” – Isabel, Bummit to Split 2014 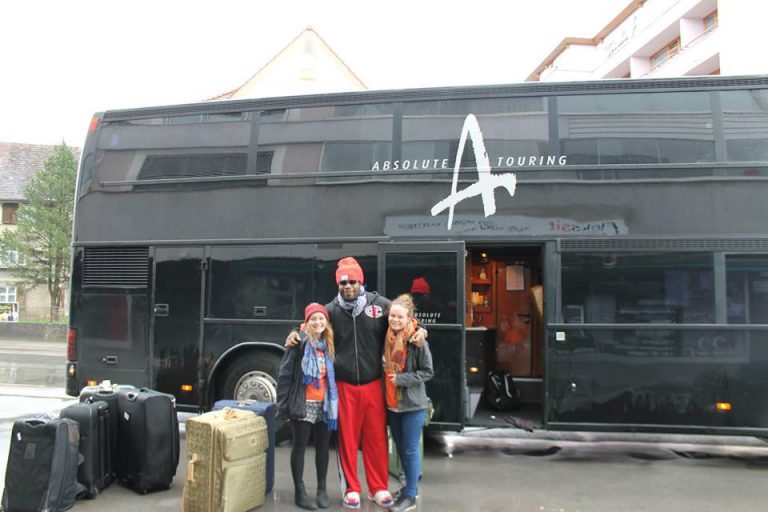 “Like many others, we spent the early hours of the second day of Big Bummit on a ferry crossing the Channel. Everyone was running around being as charming as possible to potential lifts while trying to conceal the urgency we all felt increasing the closer we got to Calais. We struck gold when after walking past a man with Bruges written on our board, he told us he was going to Switzerland. We turned to look at each other, before looking back at the man, who had looked back at us – we had a lift!. We spent the rest of the day soaking up the views and sunshine driving through France and kicking back with his humongous Golden Retriever called Wilf. We couldn’t believe our luck when he offered to put us up for the night, and when we arrived at his home in Münsingen we had been cooked an amazing dinner by his wife, which we devoured before nodding off. Waking up the next morning and looking out of the window to realize we were slap bang in the middle of the Swiss Alps was pretty magical… We were treated to a huge breakfast before being taken for a tour around Spiez and Bern, where we had coffee in a café that overlooked the city. We got back to the house for lunch where we had a full roast dinner waiting for us, and got dropped off at the nearest service station for about half one. It was an amazing start to our hitching experience outside of England!” – Alex, Bummit to Split 2014 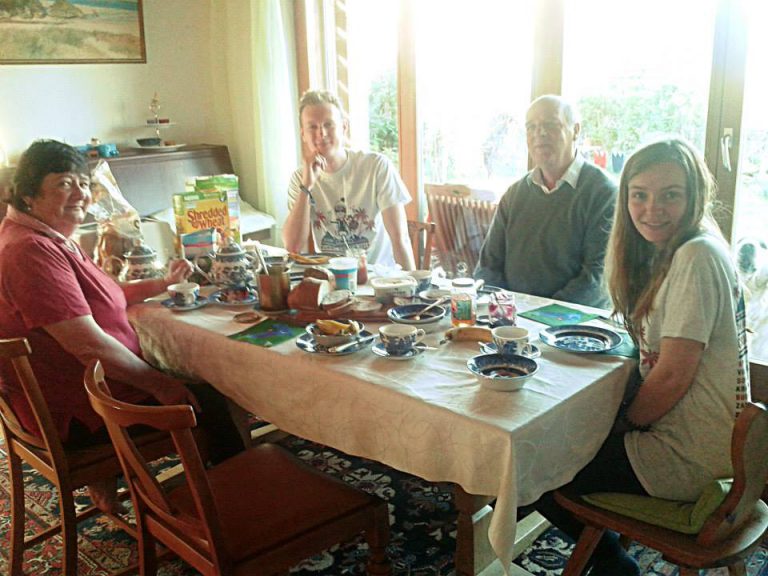